Huts of the region

Huts in  the Ittoqqortoormiit Area 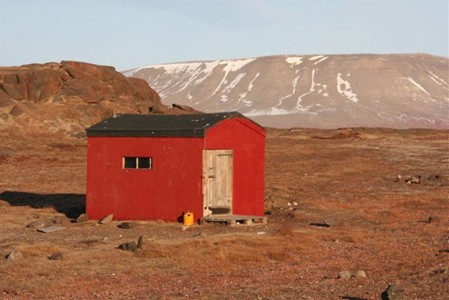 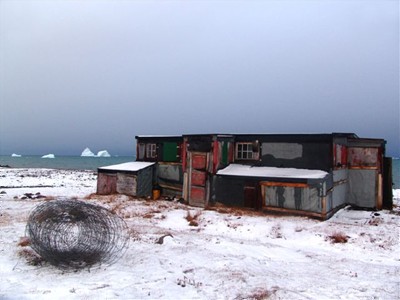 Gurreholm 71Ø?159 (71°14'N 24°36'W). Danish scientific station in western Jameson Land near Nordostbugt, built in 1937. It was named after a summerhouse of that name belonging to the owner of the Bulldog shopping chain, who had made a large contribution to the expedition finances. This scientific station was originally planned for a site in the interior of Fleming Fjord, but ice conditions in 1937 made access impossible. Lauge Koch’s expeditions used the station in 1937–38 when Icelandic ponies were stationed here and employed for transport in the wide expanses of Jameson Land. It was occasionally occupied during the war years when it went under the code name Bluie East 3. Postwar it was used occasionally by Danes and Greenlanders from Scoresbysund, and Nordisk Mineselskab also made use of the building during mineral prospecting in the 1970s. Fuchs (1985) mistakenly refered to it as Alfred Wegener’s eastern station, but this was sited some distance to the south. Eskimo ruins in this vicinity have been referred to under the Greenlandic name Ittikajik. 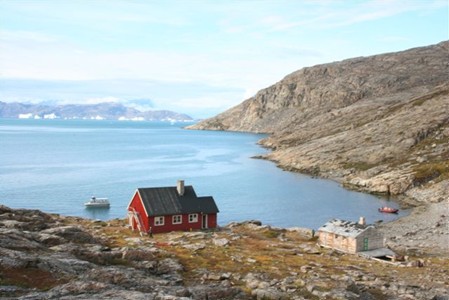 Sydkap [Suuninnguaa] 71Ø?34 (71°18'N 25°05'W). Prominent southfacing peninsula between the mouth of Nordvestfjord and Nordøstbugt. Named by Carl Ryder’s 1891–92 expedition as Syd Cap. Hunters from Scoresbysund spent long periods here from about 1934, with great success, and the ruins of their houses are found west of the cape. A more substantial house and storehouse were built at the cape in 1946 by a Danish telegraphist and his Greenlander wife with a view to fishing for salmon and shrimps, a venture abandoned after a year. Some reports say his wife found it too lonely. Hunters still periodically spent periods at Sydkap.
Kangerstua 71Ø?MC72 (71°18'N 25°00'W). Name occasionally used for the larger of the two houses built at Sydkap. See also Kangertertivarmiit.
Suuninnguaa [Sydkap] 71Ø?34 (71°18'N 25°05'W). South?facing cape on the north side of the mouth of Nordvestfjord. The name was recorded by the 1955 Geodætisk Institut survey, and means “its little head”. (Sûnínguâ)
Kangertertivarmiit [Sydkap] 71Ø?212 (71°17'N 25°06'W). Eskimo settlement at Sydkap, at the mouth of Nordvestfjord. It has been periodically occupied by hunters from Scoresbysund. Two stone built houses were built here, one a store house. Recorded by the 1955 Geodætisk Institut survey, the name translates as “those that live at the big fjord”. The name has also been reported as Kangerstua, a reference to the larger of the houses. 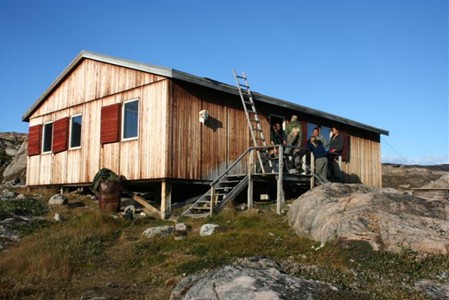 Hekla Havn 70Ø?65 (70°27'N 26°15'W). Shallow, sheltered bay on the south side of Danmark Ø. Named by Carl Ryder’s 1891–92 expedition for the expedition ship “HEKLA”, as the bay was its first place of anchorage since leaving Copenhagen and subsequently became the winter harbour. “HEKLA”, registered in Tønsberg, was a 240 ton barquerigged auxiliary steam whaler, built in 1872. Later it was purchased by the 1902–04 Scottish National Antarctic Expedition and renamed “SCOTIA”. “SCOTIA” was lost by fire in the Scilly Isles during the 1914–18 war while operating as an ice?patrol vessel. Cairns at the mouth of Hekla Havn were built by Ryder’s expedition, and by members of J. B. Charcot’s expeditions in the 1930s. The harbour was apparently known during the expedition under the name Kehlers Havn. 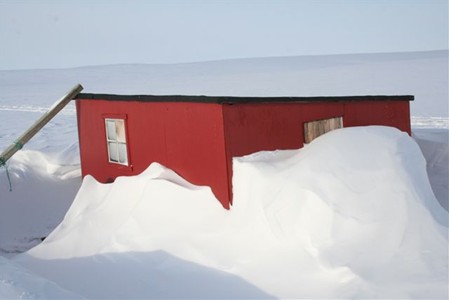 Røde Hytte [Aappalaartukajik] 70Ø-MC49 (70°33'N 23°43'W). Hunting hut on the coast of SW Jameson Land. The name has been used in archeological reports. The hut is painted red.
Aappalaartukajik [Røde Hytte] 70Ø-MC49 (70°32'N 23°41'W). Name used in Grønlands Landmuseum reports for the eskimo ruins around the present hunting hut known as Røde Hytte in southern Jameson Land. It translates as the “little reddish”. 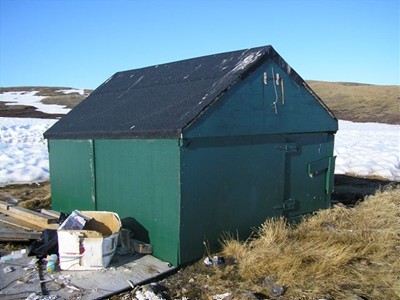 Flakkerhuk 70Ø?255 (70°28'N 23°21'W). Flatlying coastal region in south Jameson Land, characterised by a moraine ridge system 1–2 km wide and 50–80 m high. Hermann Aldinger’s original name for this feature was The Highway, and it was changed to Flakkerhuk by the Place Names Committee in 1935. 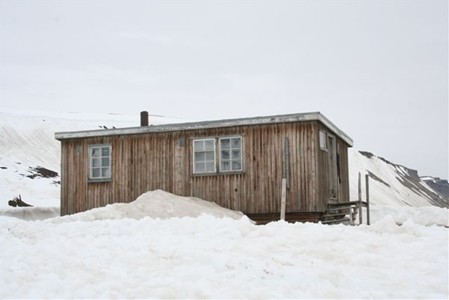 Innakajik [Kap Stewart] 70Ø?281 (70°27'N 22°37'W). Cape in SE Jameson Land. One of the names recorded by the 1955 Geodætisk Institut survey, it means “the little slope”. (Ivnakajik, Ideridek).
Kap Stewart [Innakajik] 70Ø?281 (70°27'N 22°37'W). South?east cape of Jameson Land. It was named Cape Stewart by William Scoresby in 1822 after Dugald Stewart [1753–1828], who was professor of mathematics at Edinburgh University from 1775, and of moral philosophy from 1785. The name was misspelt Kap Steward in the German edition of Scoresby’s narrative (1825). The former settlement north of the cape was also occasionally called Kap Stewart, although usually known as Ittorisseq (see also Tsuletsulekajik).
Tsuletsulekajik 70Ø?MC56 (70°27'N 22°37'W). Name reported in use for the hunting place established in 1973 near the old settlement at Kap Stewart, where a few families winter each year.

Kalkdal 70Ø?160 (70°50'N 22°19'W). Valley in Liverpool Land east of the Fame Øer. Named in the geological account of G. C. Amdrup’s 1898–1900 expedition as Kalkdalen or Limestone Valley, for the occurrence of limestone. The name was not used on maps until 1934 when it was revived and approved at the suggestion of 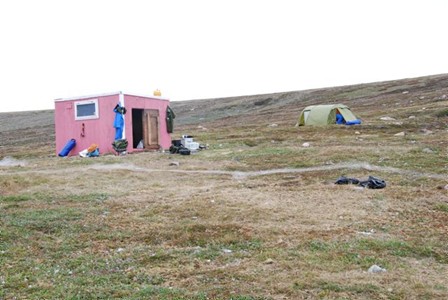 Dombravahytten 70Ø?MC9 (¤70°37'N 22°56'W). Name used until about the 1950s for the hut which Constantin Dumbrava built on the east side of Hurry Inlet at the locality known as Dumbrava..
Dumbrava 70Ø?179 (70°37'N 22°25'W). Locality on the east coast of Hurry Inlet where Constantin Dumbrava, a Rumanian scientist, built a house without permission in 1930, with the intention of trading with the Greenlanders. He was picked up by “GODTHAAB” and taken back to Europe in 1931, and the house was taken over by Scoresbysund kommune and used for hunting. The name was recorded by the 1955 Geodætisk Institut survey. Contemporary accounts of the incident record his name as “Dombrava”, a spelling carried over into the place names and still found on many maps, although it was officially corrected in 1967. 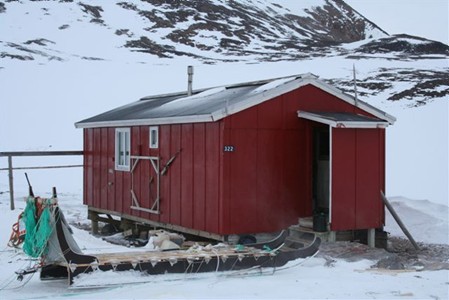 Kap Høegh [Ukaleqarteq] 70Ø?226 (70°44'N 21°33'W). East cape of Sandbach Halvø, south Liverpool Land. The name first appeared on a map compiled by Janus Sørensen (Sørensen 1928), and was evidently given for Henrik Høegh, manager of the Scoresbysund colony from 1926. The spelling of the original map, Kap Höegh, has survived on many published maps. A hunting hut was built on the low col west of the cape for the use of hunting parties from Scoresbysund.
Ukaleqarteq [Kap Høegh] 70Ø?226 (70°43'N 21°32'W). Peninsula on the east coast of south Liverpool Land. Recorded by the 1955 Geodætisk Institut survey, the name means “there are hares”. 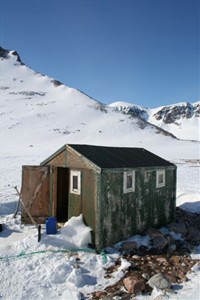 Kap Greg 70Ø?248 (¤70°57'N 21°37'W). Headland, almost an island, on the east coast of Liverpool Land. Named Cape Greg by William Scoresby in 1822 out of respect and regard to Samuel Greg of Quarry Bank. A hunting hut was built on the low col west of the cape by Scoresbysund kommune.

Kap Swainson [Nuua] 70Ø?335 (¤70°26'N 21°44'W; Map 5). Cape in southern Liverpool Land. Named Cape Swainson by William Scoresby in 1822 in compliment to William Swainson [1789–1855], a naturalist who made valuable zoological collections during travels to the Mediterranean and Brazil. A large hut has been built at the cape by Scoresbysund kommune.
Nappangulikajik 70Ø?MC76 (70°26'N 21°45'W). Name recorded by the Scoresbysund local newspaper in 1984 for the Kap Swainson area, and apparently also for the point known as Napparutikajik.
Napparutikajik 70Ø?334 (70°26'N 21°45'N). Point on the coast a little west of Kap Swainson, south Liverpool Land. Recorded by the 1955 Geodætisk Institut survey, the name means “the little upstanding”, and refers to a cairn. Nappangulikajik was reported by the Scoresbysund local newspaper in 1984 as in use for this feature, and the general area of Kap Swainson..
Nuaa [Kap Swainson] 70Ø?335 (70°26'N 21°44'W). Cape in south Liverpool Land. The name was recorded by the Geodætisk Institut 1955 survey, and means “the cape”.